It’s been a fantastic couple of days at Bedford Girls’ School. As an Apple Distinguished School we were proud to host over 100 educators from Finland, Poland, Denmark and Greenland. The delegates had come over to the UK to visit BETT 2017, and also visit other schools who use Apple technology to improve teaching and learning. 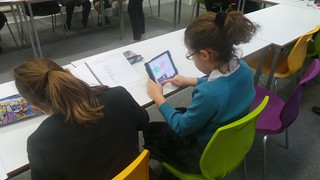 As part of the visit we gave some short presentations on our iPad story, as well as how we use iTunes U and iBooks to support learning. I was nervous but excited to explain my part of the strategy as Digital Design Creator.

The highlight of each of the visits was the opportunity to take a group on a learning walk, which is a tour of classrooms. The timetable for lessons remained unchanged and the visitors were joining ordinary lessons across a range of year groups and subjects.

Jo MacKenzie, our Head, also wrote about the visits. The girls were really excited to share what they got up to, and how iPads changed their education.

Not only did we all learn a lot about how other schools approach technology and learning, but we swapped ideas and discovered how anything from the school day structure to how marking and feedback is handled differs.

Following Bedford Girls’ School’s approval as an Apple Distinguished School in late 2016, we published our story to the iTunes Bookstore.

The application process for an Apple Distinguished School is to complete an iBook covering 5 particular areas, using a particular template base. Once an ADS, you are invited to publish the book (subject to extra approval and vetting from Apple for use of product images, logos, etc.) to allow others to read.

You can download the Bedford Girls’ School book here.

We’ve known a little while, but now it’s official and we can shout about it!

In conjunction with Apple Education, we welcomed some guests from schools from our county and neighbouring counties today, to share our iPad story.

We explained how we used the iPads, iTunes U and iBooks amongst many other tools to enrich learning, and took our guests on a tour of some lessons.

Some of our guests had sets of iPads, others were considering Microsoft, but we all had common ground in the challenges we face.

We had a photographer from the Biggleswade Chronicle visit to take a photo of the team at Biggleswade. It felt like we were at a wedding, carefully positioned to make up the shot in one end of the office where we normally receive visitors.

The photographs were following the recent Federation of Small Businesses Award for Business Innovation. Onvert, our Augmented Reality app and platform had won its category on June 13th at a ceremony at Mansion House in Old Warden, Bedfordshire.

Attached is a scan of the Biggleswade Chronicle by Sam Vernon.

Staff at a website design and marketing firm are celebrating after they received a top award.

Biggleswade-based Harmony was given the accolade for Business Innovation at the Bedfordshire Federation of Small Businesses (FSB) awards on Wednesday last week (June 13).

Judges at the awards – which took place at The Mansion house at Old Warden Park, Shuttleworth – were impressed by the company’s new Onvert product.

The product – which is available as a free app and as a more sophisticated paid-for version – turns two-dimensional artwork into three-dimensional designs when viewed on a tablet or smartphone.

Managing Director, Jason Higgins said: “Onvert almost came about by accident really – it was something that we were experimenting with but it has really caught on. Since we launched it we have had interest from a number of blue chip firms.”

The increased demand for research and production has also meant expanding the company, based at Connections House in Station Road.

Jason added: “We now have five more members of staff here and 11 employees in total. The new staff are working one of the offices here which was previously vacant and which we were thinking of letting to someone else.”

Onvert is an Augmented Reality technology which allows users to see three-dimensional projections which designers can implement in their online advertising.

Jason said: “It really does give designers a new dimension to what they do and much more flexibility.”

David Gloven, general manager of headline sponsor Mercedes-Benz of Bedford praised the ‘amazing’ quality and breadth of entrants in the awards. The FSB is the UK’s largest campaigning pressure group promoting and protecting the interests of the self-employed and owners of small firms.